How to Prioritise Features for a Product? 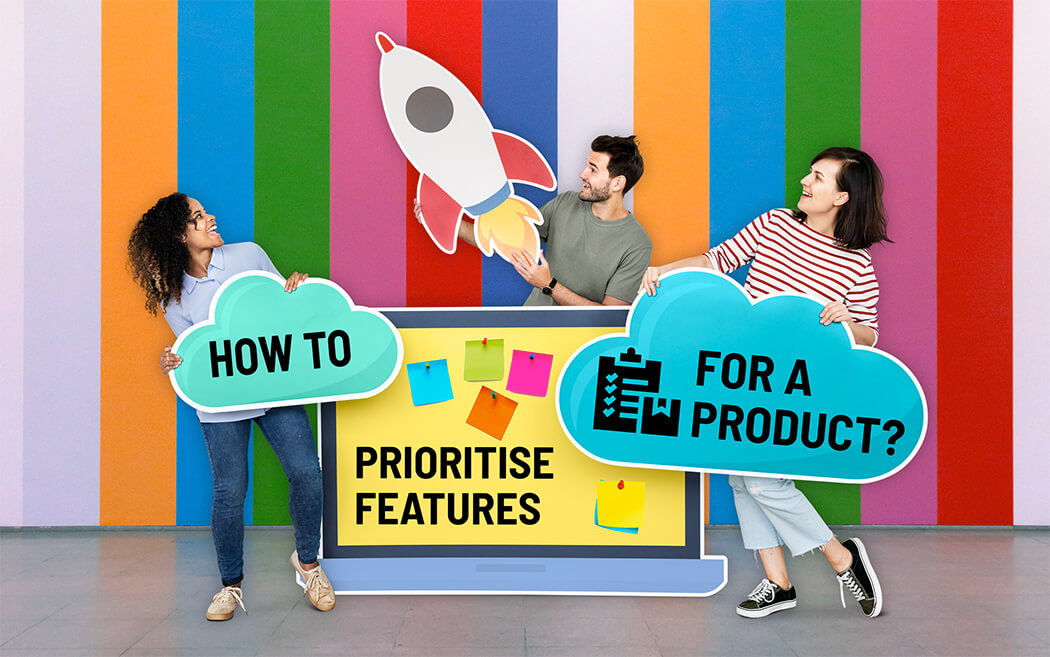 We all design products, don’t we?

Funny question, because we don’t. But talk about the some that actually do – regardless of the field and niche they may find themselves in – one question haunts them all the same: What is important? OR Given the context of this blog-piece, how to prioritise features for a product?

In this text, we will talk about the two most popular ways of prioritizing features for a product:

The Value versus Complexity Quadrant 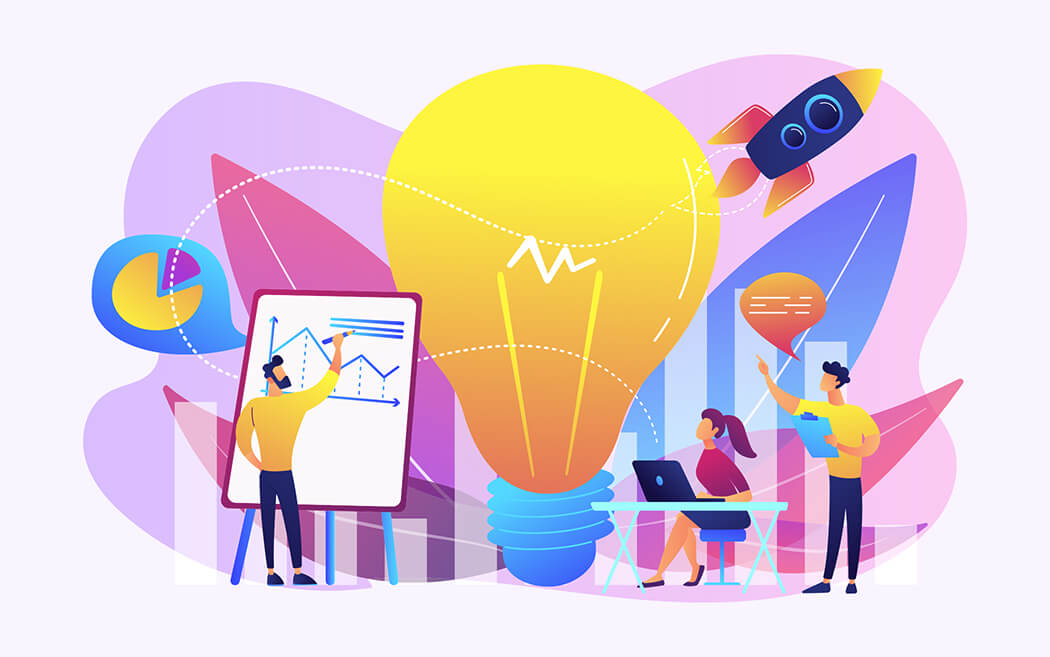 Every idea and every feature that one may think of while designing a product adds a certain business value to the product while having some complexity by default. Whereas some may argue that complexity is a relative term and out-of-the-box (OOTB) solutions may drastically decrease a feature’s complexity, we can be certain that the feature will still have a definite state of complexity (beyond which it cannot be simplified any further).

The idea here is to quantify both, a feature’s business value and its level of complexity. A good way of doing it may be using money to quantify both i.e. the monetary value of your product that a feature increases can be registered as the feature’s own value while the resources it consumes can be registered as the monetary cost behind the feature hence its complexity.

The PRO of using money to quantify value and complexity is that it increases accuracy as all monetary values are taken from the free marketplace and are hence reliable from a business point-of-view whereas the CON is that you will have to conduct sufficient market research from the marketplace itself to be able to use this system.

The role of leadership is to transform the complex situation into small pieces and prioritize them. – Carlos Ghosn

The easy way out here is to simplify this process and make arbitrary scales of value and complexity – let’s say on a scale of 1 to 10.

Once you have placed numbers on the value and complexity of your feature, the next step is simple: Plot a graph of Value VS Complexity. 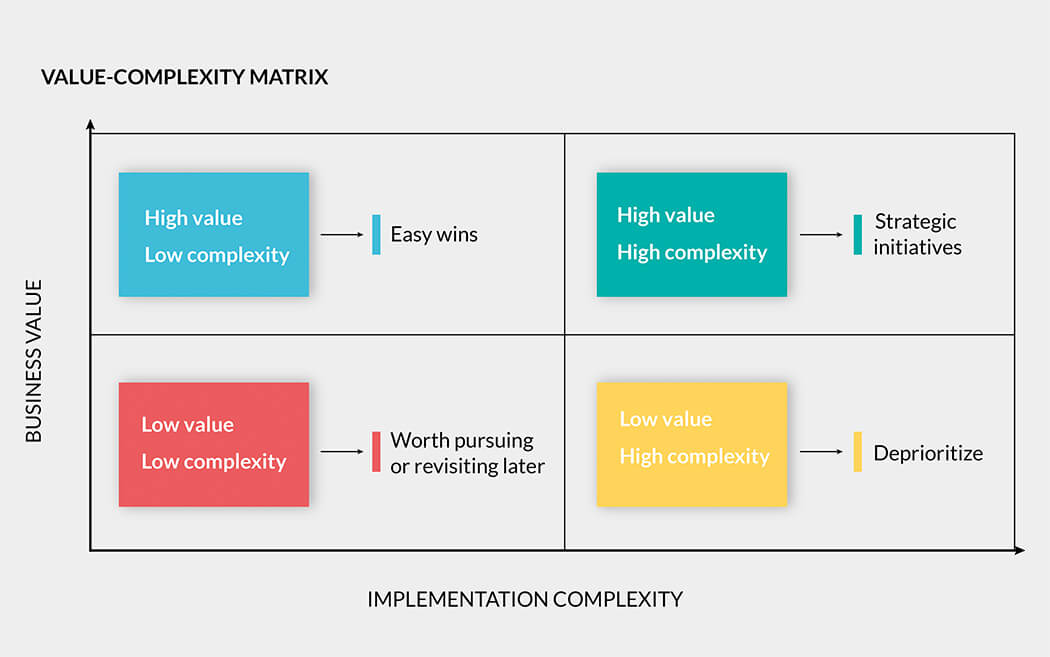 At this stage, prioritisation of features follows the following order:

These features as easy game for your product. Invest a little in costs and gain a lot in commercial value. These features should be your number one priority.

These features will cost you, yes, but they will surely return value. You can consider these features as strategic investments for your product. Such features should be your number two priority.

In my limited experience, the “number” of features your team develops matters greatly to them. Just ask yourself this question: You can either work on two complex features or ten simple features. Both will take you a week to complete. What seems like more work? The two or the ten? Basic human psyche would say ten. And that is how you may expect most of your team to think like. So, if you ask me, you may include them in your product based on your team’s structure, OR, you may go out there hunting for other HV/LC and HV/HC features instead.

These features give you less value but cost you greatly. For most product designers out there, such features are a solid NO. You may start thinking at this that you should totally reject the idea of including such features in your product. Well, hold yourself for a moment.

Yes, these features should be your last priority, but if you are really planning to be at the top of your game and actually want to milk it, you may even end up including these features in your product. I have never been part of the iOS development team but I am sure there must be some LV/HC features included in every iOS build that Apple releases.

At me saying this you may start questioning the whole purpose of prioritising features in the first place.

If you do, just know that not every designer has the same niche of consumers as Apple does. Firstly, the price tags that Apple throws at its customers balance out every possible cost that Apple may possibly incur; and secondly, Apple’s unique selling point (USP) is primarily the finesse of their final products.

In simpler words, Apple is nearly never designing the minimum viable product (MVP) whereas you may find yourself designing an MVP nearly every time you design. If so, just know that the system of prioritising features stated above will help you greatly.

This method delves a bit more into the nitty gritty of the features that you would want to compare. It gets, let’s say, a bit more mathematical.

The process is yet again simple. Just note down the following:

A good way of using this method is measuring every quality on a scale of 0-100 and the importance of every quality between 0-100%.

Once you have decided all this, integrate all of these into a matrix. Here is a conventionally popular matrix that I would like to use for my products: 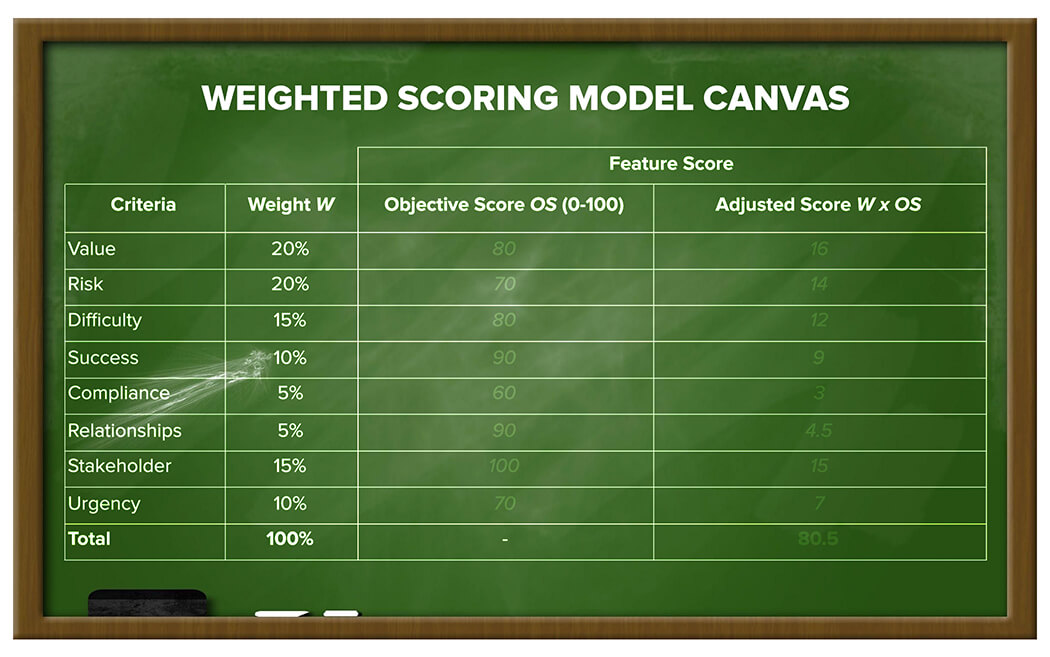 This matrix will give you a final weighted score (between 0 and 100) for each feature.

Let’s assume you were comparing three features and their scores are given as the following:

You may also set a base threshold for yourself. For instance:

“If a feature’s weighted score lies below 50, I will not even consider it for the next six months.”

The possibilities are limitless!

There is no one shoe that fits all! As a product designer, you shouldn’t ONLY rely on these methods but check out other prioritisation strategies as well.

UX Design Tips For Your App With Examples