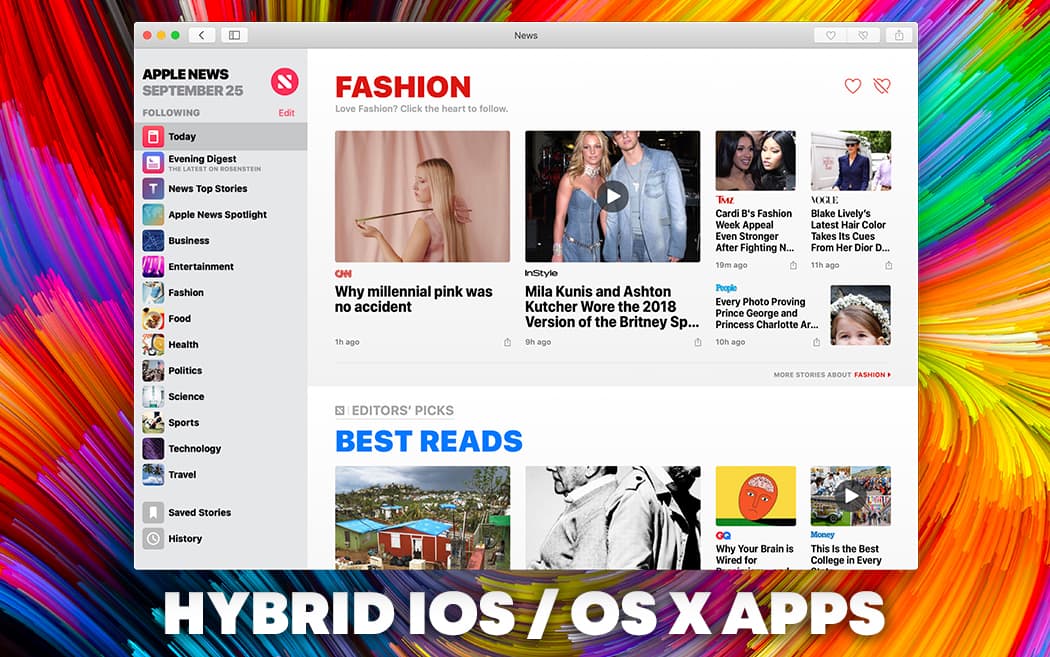 With the release of Mac OS Mojave came a new chapter in Apple’s apps ecosystem. We first heard about this back at WWDC in June, where Apple announced that they would be offering developers a new option as early as 2019, through which they will be able to build applications that can run on iOS as well as the Mac. Furthermore, they revealed that they would build the first 4 applications to use this platform, and release them with Mac OS Mojave. These apps are: Apple News, Stocks, Voice Memos and Home. Now that Mojave is finally out, we got our hands on the release and took these apps for a spin.

What was immediately evident was how much the design of these applications felt like something built for a touch screen device, and not a laptop computer. That makes sense of course, since these are essentially the iPhone and iPad versions of these applications, running on a bigger screen. That’s the point. Developers are being encouraged to design & develop their app’s codebase once, and deploy across all Apple platforms (the Watch and TV being a slightly different story).

While this feels like a great step forward, it was slightly disappointing and underwhelming to see how sluggish these apps felt in terms of performance. We tested them out on a MacBook Pro i5 3.1 GHz with 16 GB RAM, and the smoothness of an iPhone X or an iPad Pro just wasn’t there. We’re talking strictly in terms of the animations of screen transitions being a bit jerky, and not exactly giving off that premium polished feel that Apple products usually give.

Apple’s latest iOS devices are incredibly powerful, using Apple’s A-series ARM processors. Some of the benchmarks have shown CPU and GPU performances that are comparable with Macs running Intel processors. That is a staggering statistic if you think about it. It’s no wonder then that Apple’s tablets and phones are managing to run desktop/laptop level apps much smoother than the actual desktops & laptops. In the long-run however, Apple is working on equipping their next line of laptops will ARM processors, enabling them to run iOS code directly.

In terms of delivering what they promised, it is all definitely there. Perhaps it may be a bit early in the lifecycle of this platform and a bit more maturity with a couple of software updates will give it the necessary improvements. Apple did say that these 4 apps would be the test subjects based on which they will tweak and iterate the platform before opening it up to developers everywhere. Their target date is 2019, so there is still some time there.

Apple’s big picture plan however becomes quite evident with this move. They expect their different devices and operating systems to become closer knit in terms of the way they run and handle software, to design aesthetics, and everything in between. Consistency would be great to have, but that is easier said than done.

Tell us your requirements, and we’ll get back to you with a project plan for your custom built hybrid iOS / OS X app.

One of the hopes with this move is that it will reignite developers’ interest in developing for the Mac App Store once again, which had become a bit of a barren wasteland as of late. Native apps such as Twitter were pulled due to a lack of interest and necessity, with the web app being far superior in every way. With the ability to simply utilize the iPhone & iPad versions of Twitter — which are fantastic — Twitter would probably be more than happy to release a Mac OS version of the same application, without needing to exert much effort. This is just one of many possible examples (think Facebook, Instagram, even Snapchat?). All-in-all this is a welcome move from Apple and a definite step in the right direction from the perspective of mobile app developers.