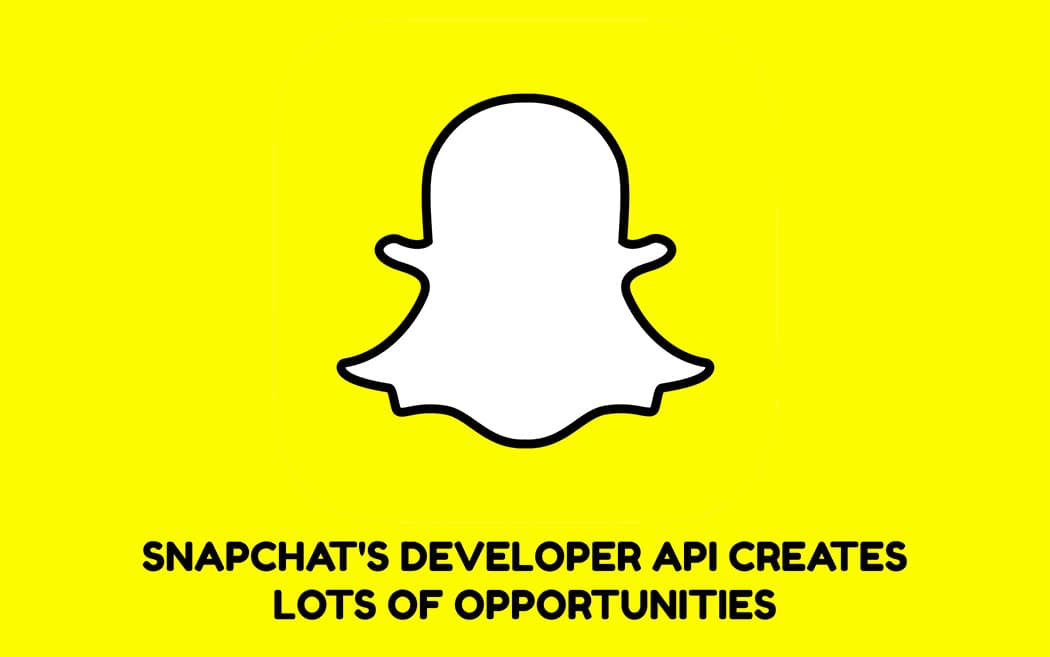 Snapchat’s CEO Evan Spiegel has announced the company’s next big step, which is the release of the much anticipated developer APIs. Snapchat will finally allow 3rd party web & mobile application developers to leverage Snapchat’s platform with deep integrations. This has been eagerly awaited by the development community as Snapchat was one of the last holdouts from the major social media networks to release an API. They cited “Privacy & Security” as the main factors behind the delay in taking this step, and given the recent climate, this was probably smart. In this post, we’ll dive into a bit more detail on not only the privacy aspects, but first let’s have a look at the feature-set and discuss some of the possibilities these new APIs bring to the table.

There will of course be a login API called Snap Login, which doesn’t surprise anyone, given that a similar feature exists for Facebook, Twitter, Google, and a ton of other platforms. However, the difference here is that Snap will not give the developers any information beyond just the username. Developers will not be able to gather any demographics or profile information on the user, and Snapchat has explicitly said that they will never open up the user’s friends list to the developers for privacy reasons. Smart move.

Next up is the Snap Camera API which will enable users to be able to share content directly to their Snapchat Story from other apps. This has been a highly requested feature for some time now and it is great to see Snap take the feedback received from the app developers community to heart. Sharing experiences on Facebook & Twitter had been a breeze till now, and Snapchat was definitely starting to get left behind, so this was much needed. Imagine a scenario where you are at a birthday party, and have been taking pictures & video clips all evening. The next day, you can simply open up your Photos app, select pictures & videos from that event and create a new Story. Another API that is being made available will allow users to use their Bitmoji avatar in other apps, such as Messages or Tinder. Personally, I don’t get what all the fuss is about with Bitmojis and ever really understood that whole hype. But I guess it’s something the kids are doing and it was a simple enough integration for Snap to make. People apparently invest a lot of time & effort into their Bitmojis and see it as an extension of themselves. Posting reaction memes and gifs in message threads has become commonplace, so this seems to be a feature stemming from the same vein. Lastly, and perhaps the biggest API in my opinion, is one that will allow developers use public Snap (photos & videos) to create themed Stories on the web. This is where the big picture starts to become a bit clearer. Nowadays it is almost a given that an article, whether news or entertainment related, will have a tweet or two embedded within it to quote prominent people involved in the story. What Snapchat is trying to do here is recreate that lightning in a bottle, with pictures & videos. Although Instagram does already have embedding available for Insta Posts, they don’t have such a feature for Stories. Being able to create your *own* story is similar to Moments by Twitter, where you can collect a bunch of (publicly available) tweets and organize them into a Moment which can be viewed in the Twitter app, or as an embedded frame on a web site. With Snap’s new API, people will now be able to do the same, but with publicly available Snaps. This feature has the potential to capture a completely different audience than the one Snap is currently catering too, which is just what the company needs amidst growing concerns of stagnating user growth.

Snap has made it very clear that at the heart of this big new step will be Data Privacy & Security. All 3rd party apps will go through an approval & review process. Apple was the first company to introduce a review process for 3rd party apps to go live on its platform. Back in the day, Facebook & Android were allowing 3rd party developers to build and deploy apps without any intervention from the platform itself, while Apple was making developers go through painfully long approval processes (they used to sometimes take up to 3 weeks).

Over time however, Apple was vindicated in their decision to put security first, as the App Store quickly gained the reputation of being a secure environment for all people, regardless of technical knowledge, to safely download apps without fear. Meanwhile, Facebook was filled to the brim with spam in the form of game invites, and letting developers scrape & dump vast amounts of private user data. Android had its own share of issues with malware and spyware running rampant in their apps as their platform was as open as they get. Eventually, both Facebook & Android introduced approval processes, which have since become the norm. Snap, learning from its predecessors, has followed suit.

It had become apparent that Snap was losing the battle to Instagram, and that bold moves would be required in order to stay relevant in the next 5 years. While this may not be the blockbuster move that captures all the headlines, it is definitely steps in the right direction. Snap needs to be able to prove to its investors that it can grow beyond the youth demographic that it currently touts as its crowning jewel, and continue to grow. Time will tell if this will be the moment that Snap turns it around. They sure do need a win right about now.