Three Ways In Which Driverless Cars May Redefine The Auto Industry 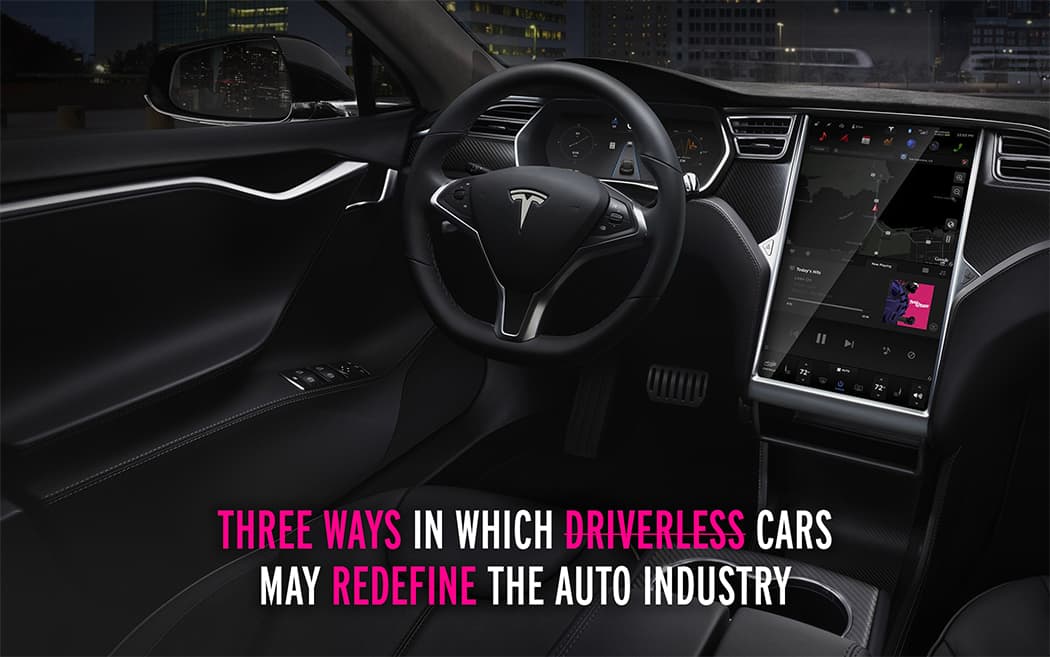 I have a severe case of driver’s anxiety. On top of that, my car has a manual transmission. This means, I have to constantly check the mirrors while backing up to avoid pedestrians or other vehicles, while balancing out how to ease off the brake and clutch to get the car moving. The same goes with any driving technique that requires certain level of technical prowess such as parallel parking.

How easy would it be if you didn’t have to lift a finger or frantically check your side mirrors every time you maneuvered through the rush hour traffic, or had to stay awake while driving long routes?

Pretty self explanatory, these autonomous vehicles can drive themselves without human interference. Major companies like Google and Ford have already acquired licenses to test their own fleet of autonomous vehicles on the road. This shows that the dream of a driverless car that was inconceivable (much like the modern smartphones) a few years ago, is now on the brink of becoming a reality.

Here is what the stats show:

These stats and the current progress in driverless models make a pretty compelling case to bring autonomous vehicles on the roads fast. Let’s see how a driverless future will affect the automotive sector.

Accuracy of Mapping Sensors will Increase In a driverless car, everything from navigation to checking out the best routes and maneuvering through detours is done by a computer. But how do you create maps that show particularities like every stop sign, fire hydrant or handicapped parking spots in an area? That is a challenge that technology companies like Google and automakers are currently trying to overcome. Streets are always changing and these cars must be able to make adjustment in real time.

But they are figuring out ways to solve these challenges, and the implications are tremendous. For instance: A few decades ago, car manufacturers rarely gave much thought to passenger comfort. The interior was nothing more than soft bench seats. Now, they can be anything from a movie theatre to a conference room. In the case of autonomous vehicles, every person will be a passenger. So, manufacturers and technology companies will have to focus more on passenger comfort now than ever before.

In the future, manufacturers hope to create autonomous vehicles that improve comfort for rear seat occupants as well.

To illustrate, consider the fact that many concept cars of today are being designed for a driverless future with a focus on passenger comfort. The design of future connected cars will include the rotation of front seats to make them face the back seats for conferences and meetups. For example, Volvo’s Concept 26, a concept driverless vehicle released a few years ago, attempted to make riding in the rush hours more comfortable for every passenger with swivel seats and pop up tables with televisions. Technological innovations have made it easier for vehicle owners to navigate the streets and traffic. For example, the latest vehicular models sometime come with proximity sensors that detect when your car is too close to another vehicle or object for comfort. To illustrate this, consider ultrasound and electromagnetic sensors which use sound waves and an electromagnetic field to detect objects and alert drivers.

We can custom build & integrate AI into your existing workflow to help you make more informed decisions.

However, they still require drivers to be fully aware of their surroundings and to anticipate alerts when they have to, say navigate through a busy intersection.

In the case of driverless cars, AI, specifically machine and deep learning, is making driving smarter and more autonomous.

For example, consider the fact that we drive as we perceive objects on the road, slow down if there are kids playing nearby or stop when someone is crossing the road. Some driverless vehicles are already trying to substitute this awareness with deep learning. Instead of using many rules to navigate the roads (e.g differentiating pedestrians from cyclists) the algorithm that powers the driving software is fed with many images of objects that we typically encounter on the road. The more it encounters these objects, the better it gets in identifying them.

To illustrate, consider Drive.ai that uses deep learning to classify pedestrians by learning patterns in their behavior. In the future, deep learning algorithms will be more precise in recognizing and retaining differences that are more minute like differentiating short people from children or pets on leashes from strays that might wander onto the roads.

In summary, with innovations in artificial intelligence, mapping technologies and passenger comfort, autonomous vehicles seem well on their way to becoming a reality. Instead of drivers, the traffic navigation will be left to computers. With development and testing in initial stages, it is still too soon to predict how the auto industry will evolve or adapt to autonomous driving, but a more promising future surely awaits us..

To learn how other industries are benefiting from innovations in AI, check out the AI’s impact on modern healthcare.