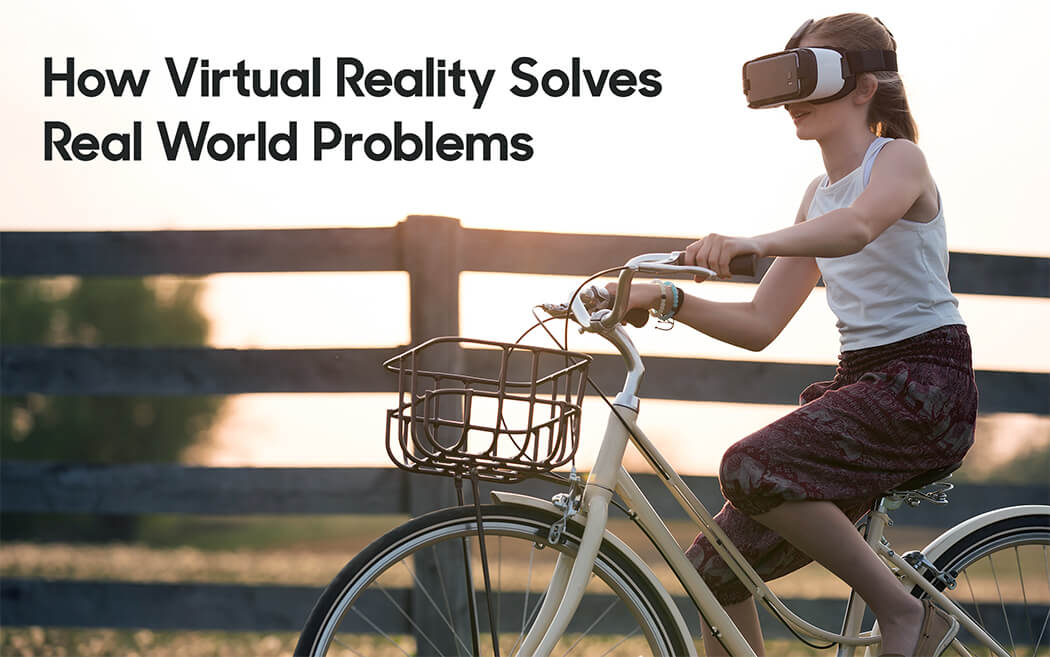 In the television show Star Trek, the crew of the USS Enterprise uses Holodeck, a smart virtual system, to create any solid person, vista or scenario based on whatever parameters are programmed into it. While the virtual room was mainly used for recreational purposes, it was also used for scientific simulation or even tactical training exercises.

While we are still a long way off in emulating a virtual reality where a few commands can create physical objects, current innovations in VR (Virtual Reality) have shown potential to solve problems in the real world.

To illustrate, VR is a computer technology that creates a simulated environment for a user. Unlike a typical user interface in which the user’s experiences externally, VR places the user right inside the experience itself. Think of it like replacing your entire reality with a virtual one which you can interact with by the help of VR systems.

By replacing our reality with a virtual one, it positions us better to understand real world problems and solve them. Here are some ways that show how:

For businesses that send employees off on the fields to work in hazardous conditions, safety is a top priority. However, accidents still happen and fatality rates in certain industries remain high. In dangerous worksites like oil rigs, for example, regular safety briefings and drills may keep workers aware of the potential dangers of their jobs but they still find themselves ill prepared to act when things really do turn out for the worst.

Unlike the real world, virtual reality is safe, which makes systems like VR headsets good solutions for safety training. Just as VR might let job seekers experience certain roles before they apply for them, it can also help prepare workers to act during dangerous situations or let them see how certain actions during particularly dangerous tasks might endanger others.

For example, some oil rig companies are introducing training programs where workers can see virtual versions of their worksites and play out safety procedures in simulated scenarios. Another example is a healthcare institution where medical practitioners are trained on procedures, like catheter insertions, in a VR lab. The training also involves placing students in virtual rooms where they make crucial and sensitive decisions about patients.

Getting the right people to fill advertised roles is a challenge which organizations face. Once confirmed, candidates start off a role pretty well only to figure out later that they either aren’t cut out for it or don’t find it challenging enough and leave. Premature resignations like these hurt a business’s retention efforts. It also wastes the time and resources it took to recruit and train these employees.

Businesses use various ways to make employees stay for the long term like healthcare benefits and onboarding programs; but these methods don’t always guarantee employee retention. Other reasons why may employees quit early include the following:

How can VR help in this regard? By providing promising candidates a virtual workspace that will help them experience their roles before they actively participate in it. In fact, some ventures have already taken this step. A German company, for example, uses a VR system to make job seekers experience the roles before they can apply for them. By giving candidates the chance to experience the jobs and the roles they are expected to play, businesses can become more competitive and prevent employees from resigning too early.

By transporting users right in the middle of experiences, VR entirely changes the way we visualize and hence offers a lot of possibilities into its potential as a problem solving tool. For example, a homeowner who reaches out to an architect to build a house may use a VR headset, instead of a 3D model on a computer screen or a static blueprint, to see how proposed changes in a penthouse interior might look like once implemented. A notable car manufacturer also uses VR headsets to visualize short or tall drivers in driving simulations which gives engineers valuable insights into how the interior of vehicles should be designed.

The immersive and interactive capabilities of VR systems as well as their ability to emulate real world environments solidifies their position as problem solving tools.

Enjoyed reading? Check out this post about the future of chatbots.