The Development of a Virtual Reality Showcase 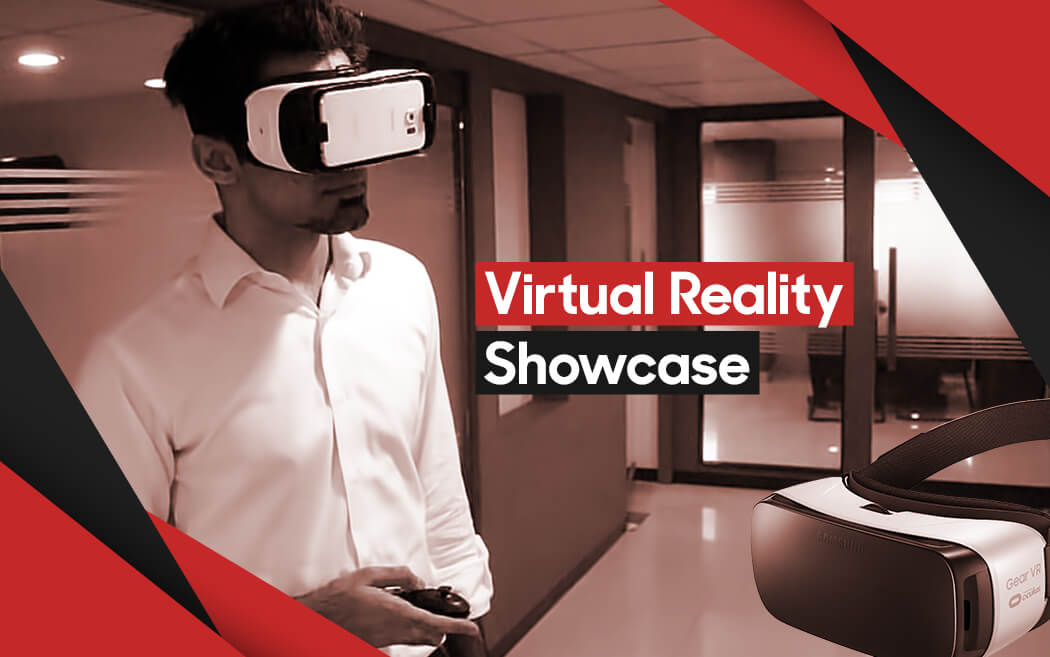 Virtual Reality (VR) is an area that has long fascinated us. If you look at the skill-sets we possess, the services we offer and the projects we have done in the past, this will seem like a very natural progression.

We design and develop apps for the web and mobile platforms. These often range in genres and types, from large scale enterprise products such as CRM and HR management systems to digital campaigns and games for brands and businesses. Three years ago, we added 3D design, modeling, animation and more to our repertoire by starting a VFX wing called CygnisFX.

VR app design and development by its very nature is a melding of the two worlds we operate in. Thus, it was only a matter of time before we jumped in. At the beginning of 2017, we started our R&D into the world of Virtual Reality and have made some fantastic strides since then. Here, we’d like to share our experience building a virtual room which acts as a showcase for our work.

We wanted to start out with something small & simple which could showcase our work and give people a taste of our 3D modeling and texturing abilities. We decided on creating a living room area of an apartment. The interactive components would be a magazine lying on the coffee table and a TV screen on the stand. The magazine would have our 3 latest blog entries from the VR tags in our blog, and the TV would contain 6 videos from our Vimeo channel. The player would be able to read from the magazine in a floating window in the world, and watch the TV, switching channels by interacting with floating video selection screens in the world.

As for the rest of the environment, we wanted it to be sleek, modern, futuristic yet homely. It should make you feel like you are in an actual apartment without feeling like too much of a departure from reality.

Once we had a concrete vision of what we were looking to build, we started cobbling together some assets. We thought about what kind of things a living room might have. Lamps, cabinets, a couch, a TV with a stand, and so much more. Piece by piece, we modeled these objects and applied textures to them to bring them to life.

Next, we created the structure of the room and arranged all the assets in there, the way we would when decorating our own room. As it turns out, the best way to get good results in virtual reality is to borrow from your experiences in actual reality. We also added some lighting to make the room come together and feel more lifelike. Putting it all together in the virtual world

Now came the technical part. We developed the Virtual Reality app in Unity 5.5 using the Oculus Rift Framework v1.0.2, a Samsung Galaxy S6 and a Samsung Note 5 with Samsung Gear VR for testing, and a Bluetooth controller for input. We started by importing the 3D assets from Studio Max to Unity. We set their scale and sizes to the real world scale vector. Next, we set the gravity to -9.8 to mimic the real world as well. Then we set colliders in the room so that when we are walking, we don’t run through the sofa or coffee table. The walls and furniture all became solid objects that could not be passed through by the player. We then assigned triggers to the door, the magazine on the coffee table and the TV’s on/off switch.

These scripts performed certain actions when clicked on, such as displaying the magazine’s window, or turning on the TV. We used some video plug-ins to play the showcase videos when the TV is turned on and switch those videos based on the video thumbnail triggers.

Finally, we added a camera into the scene which would act as the player’s eyes. We then mapped this to the input received by the VR app through the input device, in this case the Bluetooth controller, enabling the player to move around by using the joystick on the controller. In essence, they are moving the camera.

The final result was a virtual reality in which we can walk around the room we had once envisioned on a piece of paper. It felt surreal to say the least. Here is a video of a walkthrough of our virtual reality showcase. We hope you enjoy it.

We are currently working on a virtual reality cricket game which we will be releasing shortly.